The Language of the Austerity Debate As European governments begin to openly challenge the EU and ECB policies of austerity measures, it’s an interesting moment to look at how both sides have been waging the debate. Keith Yazmir, managing director EMEA at our partner agency maslansky + partners, works to help clients use the right language that resonates emotionally with their audiences. Here, Keith dissects some of the words of the austerity debate. –David Gallagher

The Language of the Austerity Debate
By Keith Yazmir

As the Eurozone’s economic woes continue, there is increasing debate over the belt-tightening medicine championed most loudly by Germany’s Angela Merkel. The question economists and politicians can’t agree on is hardly nuanced: will asking European countries still recovering from “the crisis” (as it’s universally known here) to bring down their debt end up saving the patient, or killing it?

But what are we really talking about here? “Austerity?” “Budget discipline?” “Fiscal consolidation?” As someone who helps companies and politicians use the right words and message frames to achieve specific objectives, I’ve watched with great interest how different players in Europe and elsewhere are wielding language to help – or hurt – their causes.

Ms. Merkel, whose country currently boasts a balanced budget, talks about reducing national debt levels – those of other countries, of course – in somewhat clinical terms. She praises the merits of something commonly translated as, “fiscal consolidation.” Whatever that means, it doesn’t sound too difficult, let alone painful. Her language makes potentially painful measures sound mild. I too probably could stand to consolidate a little.

Interestingly, the story inside her country is very different. In German, she refers to “konsolidierung,” equally sterile to foreign ears though to Germans strongly connected to the familiar concept of “haushalts konsolidierung” – an oft-used reference to keeping your family’s finances in order. For internal audiences, this makes Ms. Merkel’s usage feel at once more personal and somewhat moralistic. Thus her language strikes a balance, sounding less threatening to non-German audiences she is trying to cajole and more pointed to German voters she is trying to mollify. (Another commonly used, and to my ears more inspiring, German term is “schuldenbremse,” which means to “put the brakes on debt.” With its imagery of halting momentum, this formulation may well be doing a linguistic favor for those arguing that debt reduction is holding Europe’s economy back.)

Not surprisingly, across the way in economically struggling France – where debt levels are above the European Union’s maximum allowed level – the term of art is the more painful sounding “l’austérité,” which doesn’t sound good in any language. One thinks of fasting monks or harsh desert landscapes. And the idea of this being imposed on the country reflects the feeling that Germany, with the support of the European Central Bank, is playing the strict parent to France’s naughty child.

The language game continues in the argument by some that France has implemented austerity measures in name only – an assertion reinforced recently by Prime Minister Manuel Valls when he stated flatly at an annual gathering of his ruling Socialist party’s faithful that, “we aren’t implementing austerity” – and went on to repeat it eight times. The Prime Minister’s speech came shortly after an interview with the French daily Le Monde in which the Minister of the Economy had decried, “the forced march of deficit cutting” – bringing to mind more the gulag than economic policy – in an interview with the French daily Le Monde. (Perhaps not surprisingly, this turned out to be that particular public official’s final public statement as minister.)

In terms of how this is playing in the mainstream European and North American press, usage seems to favor the more negative-sounding “austerity” (when not quoting Ms. Merkel and her co-consolidators). I personally find it striking that no one on the hawkish side of the debate seems to have taken this on. Why for instance isn’t anyone arguing that living within one’s means (i.e. with a balanced budget) isn’t “austerity,” it’s “normalcy?” (Yes, some will argue that no one has taken this approach because it’s NOT normalcy in the vast majority of developed countries – and wasn’t in Germany either up until last year – though factual details like this rarely get in the way of a spirited partisan debate.)

With Mario Draghi and his European Central Bank recently cutting interest rates to virtually non-existent levels and talking asset purchases, the feeling here is that the momentum may be turning at least partially against the “consolidators” and in favor of the anti-“austerity” crowd. But this debate is far from over and we can all look forward to watching the language Mr. Draghi and others use to advance their economic – and political – agendas over the coming months. And probably years. 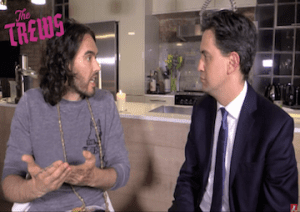 The Labour Party should not be surprised at the situation it currently finds itself in. When you have a leader that doesn’t connect with people, a strategy that people don’t understand, and policies that appeal to a minority of the electorate, then another term in opposition should have been (and was by many) expected. But […]