An article by Derek Thompson in The Atlantic reveals some fascinating research that nods to the fact that social media has, over the last 12 months, become a de facto source of traffic for news websites.

Analysis of data from the BuzzFeed Partner Network (which includes popular sites like BuzzFeed, the New York Times and Thought Catalog) shows that referral traffic from Facebook grew from 62 million at the beginning of 2013, to 161 million by the end of the year. (Click to tweet) 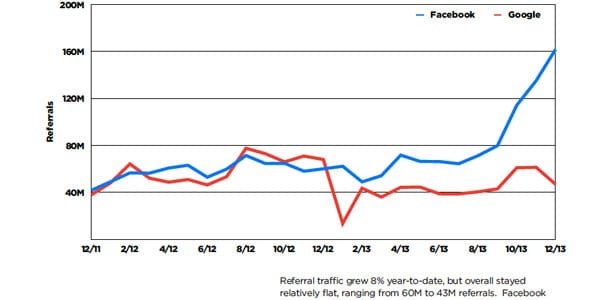 That’s a significant increase and seems to firmly position Facebook as a place that can act as your default homepage.

The Atlantic’s research goes a step further. An analysis of the type of content that is most frequently shared on Facebook News Feeds shows that we aren’t talking about breaking news stories, rather what journalists call “evergreen” stories – articles that have no specific shelf life.

As Thompson describes, “Facebook’s News Feed, a homepage built by our friends and organized by our clicks and likes, isn’t really a ‘news’ feed. It’s an entertainment portal for stories that remind us of our lives and offer something like an emotional popper.”

A comparison between the “biggest” stories on Facebook and Twitter clearly demonstrates how consumers make use of the two networks.

On Facebook, only seven of the top 20 viral stories from Buzzfeed in 2013 dealt with “national news stories.” On Twitter, the mix is much more equal and Google searches are almost entirely news-focused.

Much of the reason for this relates to the way Facebook operates. While timeliness is something Facebook has attempted to build upon recently with “last author” and “trending topics,” the News Feed remains a place where popular or preferred content is given prominence over real-time.

Give me what I want

Understanding consumer behaviors as related to news across each of these platforms is very important.

A Pew study in 2013 found that only 10% of users go on Facebook specifically to find out about breaking news stories (click to tweet). Delivering content in a way, and at a time, that works for these users will help bring about higher engagements via clicks or shares.

With more and more brands now moving to a place where they are content publishers on a large scale, identifying these different trends in content distribution becomes highly relevant.

So while your latest breaking news announcement is likely to find a comfortable home on Google search and is definitely worth tweeting about, you might want to think about presenting it in a different way on Facebook for it to gain traction.

Effective content marketers realize this. A one size fits all approach just won’t work and now we have further research that backs this up.